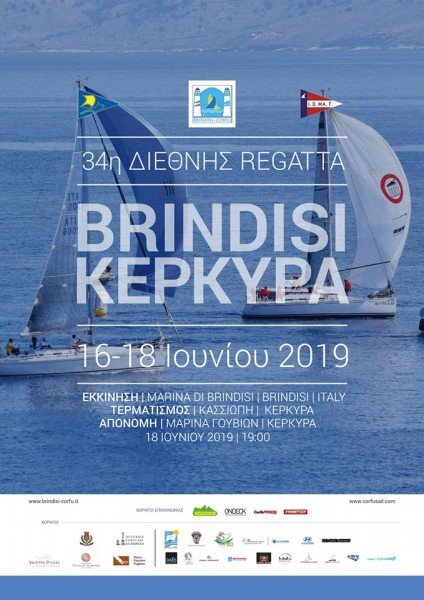 The international Regatta Brindisi- Corfu was founded in 1986. Since then sailors gather for this annual event to create new fond memories in the spirit of friendly racing. Bellow you will find information on the historical significance of this race!

The history of the Brindisi-Corfu International Regatta

The “International Regatta Brindisi- Corfu” was founded in 1986. During the first two years, the competition was limited to vessels from Brindisi.  It was three years later that the participation of aggressive Corfiot boats began. A collaboration between Adriatic and Ionian shores was born from this participation and it still continues today.

Through the following years, attendance embraced both the whole Puglia and the greek sailing clubs of the Ionian.

In 1995 the first boats of Serbia and Montenegro joined the Regatta but the real turning point of the race took place in 1998 when the current Organizing Committee was called to be interested in the event.

In fact, thanks to the accolades received year after year, since 1998 the fame of the Regatta extended beyond the borders of Italy and Greece, increasing participation exponentially. Even the aim of creating a virtual bridge between all the people facing the Adriatic and Ionian seas through the sport of sailing has been crowned with success. From 2000 to 2002, in fact, the race was held under the aegis of the United Nations as the “Race for Human Rights “.

In 2003, the Italian Sailing Federation included the event among the trials that make up the “Italian long High-Sea Championship.” Being flanked to the most famous and oldest regattas in the Mediterranean, such as “the Giraglia” and the “Middle Sea Race” is an award that speaks for itself.

With a participation of more than 100 boats the “International Regatta Brindisi – Corfu ” is now counted among the most important races that take place in the Mediterranean and is undoubtedly the most important high-sea race of the Adriatic, in terms of number of participants and technical difficulties.

Regional and national tv, daily press and sailing magazines regularly follow the event till the arrival at Corfu.

The combination of these elements has given a very extensive public opinion an image of a “Seafaring Brindisi” able to achieve great events of international resonance and to transform the port of Brindisi in a meeting place of people from different countries at the same time.

More information can be found at https://www.brindisi-corfu.com/en/